The hot sauce business is booming. With the popular YouTube series Hot Ones and various hot sauce challenges sweeping across the internet, more people are using hot sauce than ever before.

As a result, new hot sauce brands have entered the game, bringing a variety of flavors and heat levels to satisfy everyone. Some like it mild and tangy, others like it scorching hot beyond belief.

In this article, we’ll rank some of the most popular hot sauces on the Scoville scale from mild to insanely hot.

The sauces we’ve decided to rank cover the entire range of spiciness. From common diner hot sauces like tabasco all the way to Mad Dog 357 pure extract.

We’ve tried most of these hot sauce, but we haven’t been daring (or stupid?) enough to put pure capsaicin on our tongues. With that all said, let’s get started through the hot sauce Scoville scale ranks!

PepperGeek participates in various affiliate programs, meaning links contained in this article may provide us a commission should you make a purchase on the linked website.

Frank’s RedHot is a true classic, dating back to the early 1900s in Louisiana. It is also credited as a key ingredient in the original Buffalo wing sauce, created in Buffalo, NY. Now, you’ll see Frank’s in supermarkets across the globe and on tabletops in your local chain restaurants. It is undoubtedly tasty, with a simple, aged cayenne pepper recipe that is timeless.

This hot sauce will serve as a baseline, coming in at just 450 SHUs on the Scoville scale. We all know and love Frank’s, so it is a great comparison for the ungodly heat in the later sauces…

Another household staple (at least in our house) is Tabasco Brand hot sauce. They make a variety of new flavors, branching out from their original recipe, but the original is truly special.

Tabasco can bring a bland meal to life with just a few small dashes. Just three ingredients go into this sauce – zingy vinegar, red pepper and salt. The proportions work just right for sandwiches, pizza and pretty much anything else.

The heat level is stepped up a bit for Tabasco, reaching a claimed 2,500-5,000 SHUs on the Scoville scale, depending on the batch. This is tolerable to most but is noticeably spicier than Frank’s.

Cholula is one of our favorite grocery store hot sauces for everyday use. The flavor is unlike anything else we have tried and the heat level is respectable. It is also affordable and has a rich history as part of a tequila chaser in Mexico.

The heat moves up a bit from Tabasco, meaning Cholula may be some people’s tipping point for heat. We like it hot, so this is nothing crazy for us PepperGeeks, but for a hot sauce you can pick up at Stop & Shop, Cholula has a decent bite.

Cholula brings a respectable heat at around 3,600 SHUs on the Scoville scale. For restaurant tabletop hot sauces, this is about as hot as you’ll see. However, we’re only just getting started with the limits of spice…

As things heat up, the brands become less well-known. However, Dawson’s creates some of the most delectable hot sauces out there, and their ‘Original’ sauce is among them. We find some of the best sauces are simple, and this one is no exception.

The distinction here is that this hot sauce uses habanero peppers as the first ingredient. If you know about habaneros, you’ll understand why this brings significantly more heat than the first few sauces on our list. Read our full review of Dawson’s Original hot sauce here.

Dawson’s takes a significant leap up on the Scoville scale. This hot sauce comes in around 82,000 SHUs on the scale, meaning it is significantly hotter than the stuff you can buy at the store. It also comes at a much higher price tag, but we think it is well worth the price for the premium ingredients and the beautiful design and appearance.

*Save $10 on Heatonist when you spend $40 using our unique referral link here!

Well-hated in the hot sauce community for years and years, Da Bomb is notorious for its aggressive heat. Yes, we’ve tried it, and it is just as bad-tasting and brutally spicy as all the unfortunate Hot One’s guests make it seem.

The reason for this is that the ingredients in Da Bomb are more an effort to shock you, while the flavor is just an afterthought. The heat comes from habaneros, but also pepper extract, which gives it an almost metallic, battery-acid flavor.

It doesn’t need to be in anyone’s fridge. But they’ve probably sold millions of the dang bottles. Oh well, thankfully there are other sauces that are even hotter, but with delicious flavor, too.

Debuting on season 11 of Hot Ones, the Widow Maker took the number 9 spot on the spicy wing lineup. This means it is undoubtedly spicy to the everyday person, but it only marks the halfway point on our hot sauce Scoville scale list.

Dingo Sauce Co. is based in Western Australia and makes a variety of hot sauces. The aptly named ‘Widow Maker’ hot sauce uses a blend of 6 different varieties of superhot peppers as the first ingredient. This means serious heat.

However, the sauce also incorporates complementary flavors like lime, garlic and brown sugar, making this a sauce some might actually use. We like the sauces that offer both heat and flavor.

Dingo’s Widow Maker comes in at an impressive 682,000 SHUs on the Scoville scale, making it one of the hottest all-natural hot sauces in our collection. Without the use of pepper extract, it’s not common to see Scoville ratings this high.

Get Some Here, Mate

*Save $10 on Heatonist when you spend $40 using our unique referral link here!

Moving into the 7-digit SHU level of heat, the unique Hot Ones / 88 Rising collaboration brought us Dragon In The Clouds in 2019. This hot sauce is unique, but also bizarre and difficult to pair with food. It is brutally spicy thanks to Ghost chiles, and has a bitter, citrusy zest from yuzu.

Basically, we tried the sauce, and that was about the end of its use. We’ve heard from some readers that they enjoy the unique flavor, but it just wasn’t for us. Especially considering the aggressive heat.

Dragon In The Clouds hot sauce is no joke. Though we have been unable to find an official heat level for the sauce, we assume it comes in right around the 1 million SHU mark on the Scoville scale. Given that the first ingredient is Ghost pepper, the sauce most likely hits that mark. It sure feels like it does…

Mad Dog is a spicy food phenomenon. Hailing from Massachusetts, David Ashley started creating his sauces and culinary horrors in 1991. You know you’re dealing with fiercely spicy food when the company name alludes to a firearm (357 magnum).

The Gold Edition hot sauce comes with a replica shell, just for good measure. This sauce actually uses Mad Dog’s own Plutonium No.9 Extract (more on this later…) to pump additional heat into the sauce. As stated before, we’re not a fan of extract hot sauces.

However, unless you’re using rare and difficult-to-source super-hot peppers as a primary ingredient, it will be hard to crack the 1M SHU mark without using pepper extract. Mad Dog has some of the hottest sauces on the market, but they also claim to have some flavor-first hot sauces with mild heat as well.

Mad Dog 357 Gold Edition touts a 1,000,000 SHU Scoville rating. This makes the sauce unbearably hot, created for those who love to chase the heat in every meal. This bottle could last a lifetime in our refrigerator without ever going empty.

Now this is how you do a super-spicy hot sauce. The Last Dab Triple X hot sauce is meant to be used, not just to be a novelty. The strong cumin-forward flavor is addictive, and can actually be paired well with foods. We have tasted it many times, and we now have more than one bottle in our current inventory.

This is the sweet spot if you love super-spicy food, though we have some other super-hot sauces we love equally. Simply put, kudos to Hot Ones and Smokin’ Ed Currie for crafting an insanely hot sauce that actually tastes great.

The Last Dab Triple X comes in at a whopping 2,000,000+ SHUs on the Scoville scale. This is thanks to the Pepper X Pepper variety bred by Ed Currie of the Puckerbutt Pepper Company. He’s the guy responsible for creating the Carolina Reaper pepper. You know, the hottest pepper on the planet. NBD.

And now we’ve entered ‘are you kidding me?’ territory. This is only loosely described as a hot sauce since the ingredients consist of pepper extract, an emulsifier, and vinegar. Satan’s Blood is not intended to be used to enhance the flavor of food. The only goal was to make food fiery hot.

I would have to say that they succeeded.

I think the reason I bought it was the sinister packaging, coming in a bottle that looks like an evil witch’s poison vial.

Yes, I have tasted this substance. It was not pleasant. It was hardly even food. But it was probably the hottest, most concentrated spicy food I’ve ever eaten. This is why I included an asterisk next to the Scoville rating…

Though Satan’s Blood has been officially rated at 800,000 SHUs on the Scoville scale, the experience is much more intense than previously mentioned hot sauces. This is almost entirely made of pepper extract, a concentration of capsaicin in liquid form. No flavor, just heat.

The warnings are plastered across the packaging of Mad Dog 357’s Plutonium No. 9 ‘hot sauce’ (if you can call it a sauce). Coming in at a whopping 9,000,000 SHUs, this can hardly be considered an actual condiment.

In fact, it states on the Amazon page that this is not to be consumed directly, but rather used only as a food additive. Not just this, but the stuff might need to be heated to 140°F just to get it out of the bottle.

No thanks. This stuff is just too high maintenance for us. We have not bothered buying this ‘sauce,’ both because it is certainly intolerable to eat, but also because the price is pretty wild. I guess extracting pure capsaicin is a costly process.

This is (hopefully) the end of the road for the hottest hot sauces in the world, but we won’t be surprised if someone finds a way to eke out another million Scoville Heat Units in the next batch of liquid misery.

See It On Amazon

Just when you think you’ve seen the hottest pepper and the hottest hot sauces, something new breaks the boundaries. We know where our limits are when it comes to pepper heat, but some like it much, much hotter than we do, and we can understand.

We hope this helps you find where your favorite bottle of hot sauce falls on the Scoville scale. Let us know what sauces you love and how hot they are!

One of the original Pepper Geeks! When Calvin isn’t gardening or learning more about peppers and botany, he might be traveling new places or playing some music. 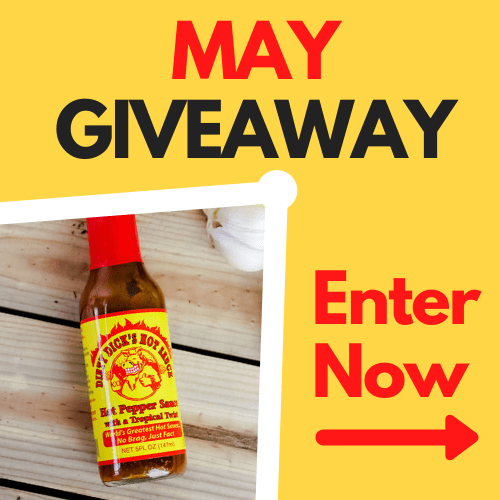