Skip to Content
Our Best Pepper Growing Guide: Growing Perfect Peppers ►
Disclaimer: As an Amazon Associate, I earn from qualifying purchases. Pepper Geek takes part in various affiliate programs. This means that purchases through our links may result in a commission for us.

One of the easiest, tastiest snacks you can make is pickled banana peppers! We always have a jar in our fridge to dress up sandwiches and eggs. It is not uncommon for us to throw a pickled banana pepper on top of a buttery cracker and a piece of cheddar cheese. Midnight snack anyone?

Banana peppers are one of our favorite varieties to grow in the garden. They’re tasty, prolific, and can be used in many recipes. Unlike some of the spicier peppers that we grow, we have no issue offloading banana peppers to friends and family.

Some people might be afraid of pickling with fear that it is too difficult. However, the process is much easier than you may think! You can pickle banana peppers using a quick pickling method, or by water bath canning. It all depends on how long you wish to keep your peppers good for.

We eat up our pickled banana peppers quick, so we typically opt for the quick pickling process. These pickles are also known as refrigerator pickles. They are not shelf stable, and they are stored in the fridge and consumed quickly.

If you are looking for a guide to preserving your peppers for long-term storage, we recommend following the USDA guide to home canning.

What You Will Need To Pickle Banana Peppers

Note: This is a basic brine recipe. We encourage you to experiment with different spices! You can try adding dill, oregano, turmeric, or different varieties of peppers. Get creative and have fun with it.

When To Pick Banana Peppers For Pickling

If you’re growing banana peppers in your garden, you’ll want to make sure you pick them at the optimal time. Always wait for the banana peppers to mature before harvesting them for pickles. They should be a pale yellow color and have reached their mature size of 4-5 inches.

If you leave your banana peppers on the plant for too long, they will eventually turn to an orange-red color. It is fine to pick them at this stage, but for the best pickles, we suggest harvesting them at their pale yellow color. Banana peppers are good to eat at any stage of growth, so don’t overthink it too much! We also have a complete guide on when to pick banana peppers.

What To Do With Pickled Banana Peppers

The possibilities are endless! We love snacking on pickled banana peppers right from the jar. Pickled banana peppers also taste great on top of a pizza (especially Hawaiian or pepperoni!). If you’re looking to spice up plain scrambled eggs in the morning, throw some on top or mix them into an omelets.

Pickled banana peppers are also delicious on tacos, burritos, and sandwiches. They add a zingy punch of flavor without being too heavy. If you have a favorite way to use pickled banana peppers, let us know in the comments so we can try it out. We always have a jar in the fridge around harvest time!

How To Pickle Banana Peppers

We also have an easy-to-follow video tutorial on pickling banana peppers on YouTube. Here is our basic procedure for quick pickled banana peppers.

In order to sterilize your jars, boil them for 10 minutes (without the lid on). Make sure the jar is completely submerged in the pot of water. After the 10 minutes have passed, remove the jar carefully (use tongs!), and place them on a towel with the rim side up.

Step 2: Clean and slice your peppers

Carefully inspect all of your peppers for signs of rot or mold. Clean your banana peppers thoroughly and prepare them for slicing. If you are using spicy banana peppers, you may want to wear gloves for this step. The best way to loosen the seeds of your banana peppers is to roll them gently back and forth on a cutting board. Then, slice off the top of the banana peppers and use a chopstick to remove the seeds and core.

Step 3: Fill your sterilized jar with your sliced banana peppers

After you have a big pile of sliced banana peppers, you can fill your jar and prepare them for pickling! You will want to pack them nice and tight and leave a bit of room at the top.

This is where all the flavor happens! Combine your water, vinegar, sugar, salt, garlic and spices in a medium saucepan. Stir well to make sure everything is combined. Bring your brine to a boil. After the brine boils, you can remove it from the heat.

Step 5: Pour your brine over the peppers

The smoothest way to do this is by using a funnel. I would also recommend putting your jar of peppers on a pan or in a large bowl. This will make it easier to clean up if there is any spillage. At this point, you can pour your hot brine into the jar over your banana peppers. Make sure all the spices get in there too! You may have a bit of brine leftover which you can discard.

Use a spatula to go around the edge and remove the air bubbles.

If you are looking to pickle banana peppers for long-term storage, you would prepare a water bath for your peppers at this point. However, we are going to store these pickled banana peppers in the fridge and consume them rather quickly. At this point, they are ready to eat! However, we suggest letting them sit in the fridge for a couple of days, so all the flavors infuse. 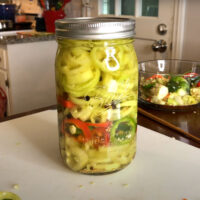 See how simple it is to pickle banana peppers? After trying this recipe at home, we’re sure you will never buy store-bought pickled banana peppers again. Let us know in the comments if you try this recipe and any variations you may have made. We encourage you to experiment with different spices and have fun!

Can you use the crispX ? To keep them crispy?

If they are sealed in the sterilized jars, why can’t they be kept in the cabinet with other canned vegetables

@peppergeek, mine sealed I put them in fridge Want to move to pantry Dont want to lose them So good Just need to slice thicker Not processor

Ideally you would steam the cans for ~10 minutes before tightening down the seals. However, I have heard of some people just pouring boiling brine and storing at room temp.

Would I be able to add onions?

Instead of a crunchy pepper,,can you lighty boil them for a softer pepper then proceed with process?

Yes, you can cook them for 3-5 minutes in the simmering brine to soften up the pepper chips.

Can you can these ?

Yes they're plenty acidic for canning

Welcome to our spicy corner of the internet. Our main goal is to help you grow healthy, bountiful pepper plants in your garden. Welcome to the Pepper Geek family. For all of our non-pepper gardening content, check out Geeky Greenhouse!